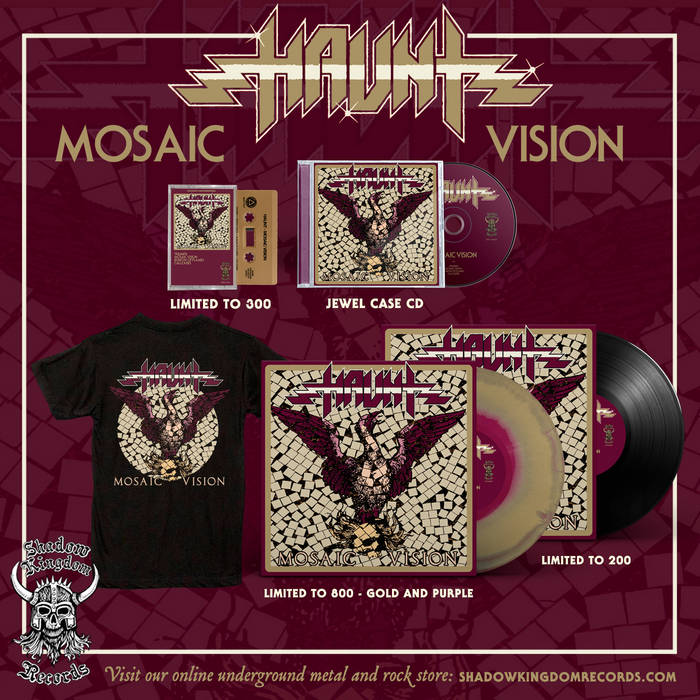 Simply put, HAUNT is the new face of traditional heavy metal & hard rock. Masterful despite their young years as a band, HAUNT began as a solo project of Beastmaker frontman Trevor William Church and promptly self-released its debut EP, Luminous Eyes, during the summer of 2017. Not long after, the EP was picked up for physical release by SHADOW KINGDOM, and henceforth did HAUNT begin their ascent...

With Luminous Eyes reaping widespread acclaim from both fans and critics alike, the stage was set for HAUNT's inevitable debut album. Aptly titled Burst Into Flame, the band's full-length debut was released during the summer of 2018 and promptly burned a whole new path for HAUNT. Now expanded into a full working lineup, Church's vision proved infinitely powerful and poignant: here, HAUNT's blend of turn-of-the-'80s heavy metal with touches of '70s hard rock positively exploded with electricity and excitement at every turn. And that electricity reached a fever pitch as the band hit the touring circuit thereafter, culminating with a rapturously received run on the Speed of the Wizard tour supporting High on Fire, Municipal Waste, and Toxic Holocaust.

Not ones to rest on their considerable laurels, HAUNT returned less than a year after their debut album with an even-stronger second album, If Icarus Could Fly, also released by SHADOW KINGDOM. Continuing that ever-upward & onward momentum with Mosaic Vision, HAUNT once again take everything that was so magical about Burst Into Flame - compact songcraft, immediately memorable hooks, impassioned playing, an understated emotional element that elevates everything above mere party fodder - and further fine-tune it to near-perfection on the enviously compact, 17-minute Mosaic Vision. Completely and 100% HAUNT through and through, almost effortlessly have the band sharpened their attack and continue to pump out anthem after anthem. Mosaic Vision is simply four more of 'em, and further EPs full of traditional metal glory will follow. HAUNT's march as new kings is only getting started!

Bandcamp Daily  your guide to the world of Bandcamp

Tropical and transportive tunes with guests Coco Maria and Anchorsong.